The poetic formation known as the “New Wave” or “Generation 68,” which dominated the Polish poetic landscape in the late 1960s and 1970s, emerged in response to specific sociopolitical conditions, and in protest against the Polish literary scene that, in their view, neglected its public obligations. They called for a literature that acknowledges “what is today the source of despair, enchantment, hatred, fear, love and faith,” expressed in a language “that lives in our brains and in our refrigerators, in which we make friends and establish relations, which distorts our judgments and helps us to lie.” They were looking for a literary idiom to confront and denounce the conditions under the communist regime. Jaroslaw Anders will talk about the groups origins, discuss their literary concepts, and recall the political and ethical atmosphere they helped to shape.

Jaroslaw Anders is a freelance writer, translator, and editor. He is the author of Between Fire and Sleep: Essays on Modern Polish Poetry and Prose (New Haven: Yale University Press, 2009) and numerous articles in The New York Review of Books, The New Republic, The Los Angeles Times Book Review, and other publications. He has translated several books from English into Polish and from Polish into English. In the past, he served as writer and broadcaster for the Voice of America and worked in the Bureau of Democracy, Human Rights, and Labor of the U.S. Department of State. He lives in Washington, D.C. 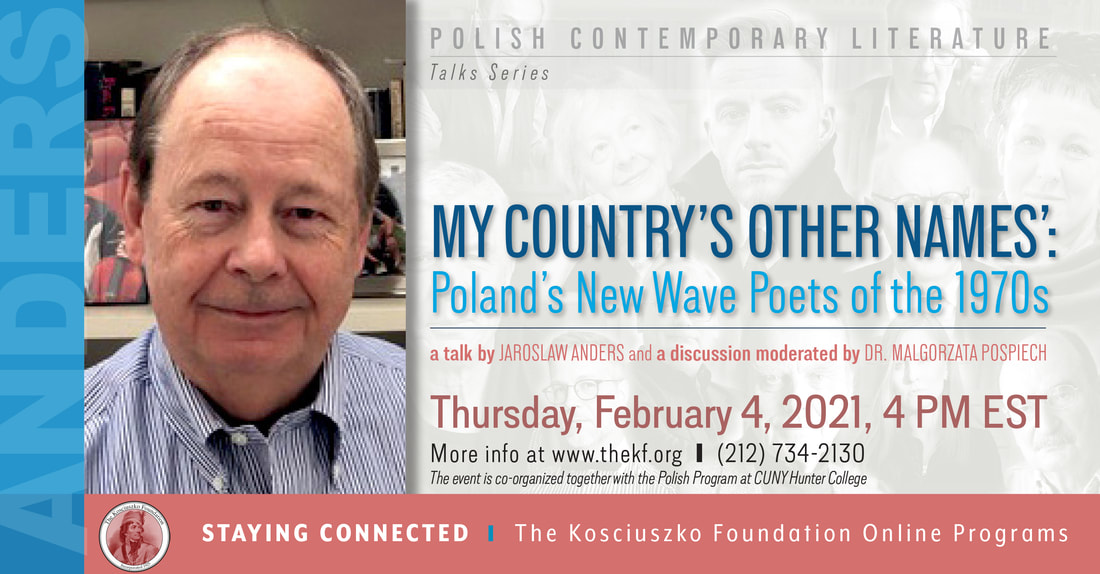 The Polish Studies Programs at Hunter College and Loyola University (Chicago) are pleased and honored to introduce our students to Agnieszka Holland, a prolific filmmaker who has directed, written and acted in numerous films produced in Poland, France and the U.S. Two film critics, academics and professors, Dr. Małgorzata Pośpiech (Hunter) and Zbigniew Banaś (Loyola University) will engage Ms. Holland in a live conversation particularly about her recent films Spoor (2017) and Mr. Jones (2019). Topics of discussion will include patriarchy, environmental activism, and totalitarian systems in the twentieth century. 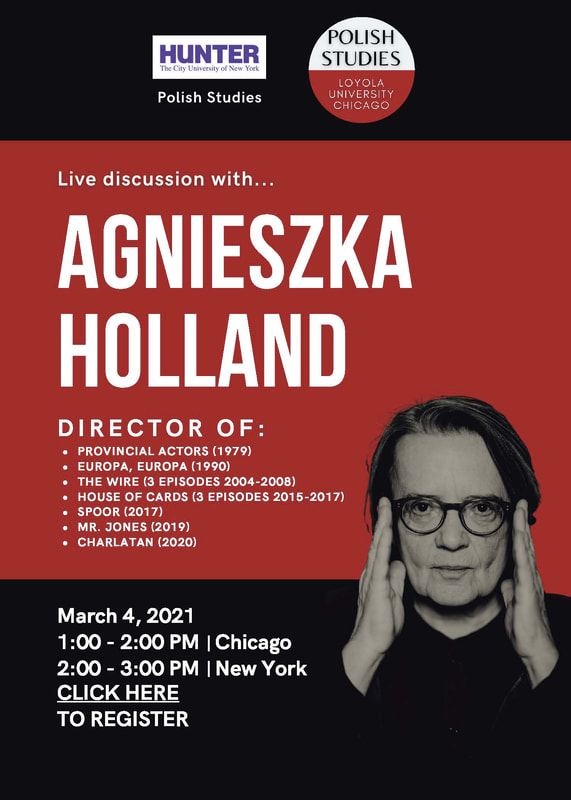 Join us for a discussion of Ukrainian hip hop in the world! Drs. Adriana Helbig (University of Pittsburgh) and Maria Sonevytsky (University of California, Berkeley) will offer an historical overview of the genre’s introduction to Ukraine, and discuss its role in the broader music industry, the dynamics within the industry that have allowed for multi-racial voices, as well as space for feminist discourses and the future of the genre amongst emerging artists.

Moderated by Prof. Leah Batstone (Hunter), the panel will feature the following presentations:

Dr. Helbig. "Ukrainian Hip Hop’s Trope of Revolution." This presentation teases out the complexities imbued in hip hop’s trope of revolution as indexed by hip hop artists, audiences, media networks, and scholars in the U.S. and abroad. It argues that hip hop’s branding as a genre of opposition has positioned it as a soundtrack for social movements worldwide. Drawing on examples from across the globe, this presentation focuses on contexts where hip hop has been identified by ethnomusicologists as a genre promoted by actors involved in social movements. It attempts to unpack the complexities within hip hop’s global and U.S.-based revolution discourse and aims to show that hip hop’s continued self-fashioning as a marginalized genre has helped position it as a soundtrack of relevance during social-media driven revolutions in Ukraine and beyond.

Drs. Sonevytsky and Yarmanova. “'A Rapper for the Village': Class, Gender, and Body Politics in Contemporary Ukrainian-Language Rap." The Ukrainian rapper and singer Alyona Alyona has challenged norms of femininity in Eastern European popular music with her unapologetic embrace of fat-positive body politics. Meanwhile, Alina Pash, who broke through with her rap track “Bitanga” (meaning “hooligan”), proudly identifies with her Transcarpathian roots. Both have attracted considerable media attention for putting alternate images of Ukrainian womanhood into circulation through their bold Ukrainian-language hip hop. Both also foreground images of rurality and folk femininity, or classed depictions of poverty, in what Alyona Alyona has described as rap “for the village.” In this presentation, we observe how both of these rappers thematize complex ideas about class, gender, and body politics in their music. We argue that, from one perspective, their feminist slant has enabled a shape-shifting body politics, one that refuses oppressive normative body expectations while simultaneously asserting cis-heteronormative femininities that reproduce some of the very same constraints that they seem to challenge. Similarly, both demonstrate a sensitivity to the brutal politics of class in post-Soviet Ukraine, while at times seeming to exoticize Ukrainian poverty and rurality for non-Ukrainian viewers. Through journalistic discourse, online fan cultures, and queer interpretive methodologies, we lay out some of the contradictions and potentials of these emerging women’s voices in Ukrainian popular music.

Dr. Adriana Helbig is Associate Professor of Music and Acting Chair of Music, and former Assistant Dean of Undergraduates at the University of Pittsburgh, where she teaches courses on world music, global hip hop, Romani music, music and disability studies, prison sounds, and bluegrass. She is the recipient of fellowships from the American Council of Learned Societies, National Endowment for the Humanities, American Councils for International Education, IREX, and Fulbright. She is the author of Hip Hop Ukraine: Music, Race, and African Migration (Indiana University Press, 2014) and the co-editor with Milosz Miszczynski of Hip Hop at Europe’s Edge: Music, Agency, and Social Change (Indiana University Press, 2017). Her most recent book, titled ReSounding Poverty: Romani Music and Development Aid (forthcoming from Oxford University Press), analyzes the impact of foreign funding on musical repertoires of impoverished Roma in the Transcarpathian region of Ukraine.

Dr. Maria Sonevytsky is an assistant professor of ethnomusicology at the University of California, Berkeley. Her research focuses primarily on post-Soviet Ukraine, where she has investigated topics such as discourses of sovereignty and “wildness” in post-Soviet Ukrainian popular music, folklore revivals after state socialism, and the effects of the Chornobyl nuclear disaster on the revival of rural musical repertoires. In 2015, Smithsonian Folkways released “The Chornobyl Songs Project: Living Culture from a Lost World,” which she produced and developed in collaboration with Professor Yevhen Yefremov (Kyiv Academy of Music), the Yara Arts Group, and the Center for Traditional Music and Dance. Her first book, Wild Music: Sound and Sovereignty in Ukraine, was published in the Music/Culture series of Wesleyan University Press in October 2019, which won the 2020 Lewis Lockwood Award from the American Musicological Society.

Dr. Galina Yarmanova is an independent researcher and a graduate of the international MA program in Gender Studies at Central European University (Budapest, Hungary). She teaches courses on gender, sexuality, and feminism at Kyiv-Mohyla Academy and her research interests include topics on reproduction and sexual rights, moral panics of sexuality, the influence of nationalism and imperialism on current sexual politics in Ukraine. 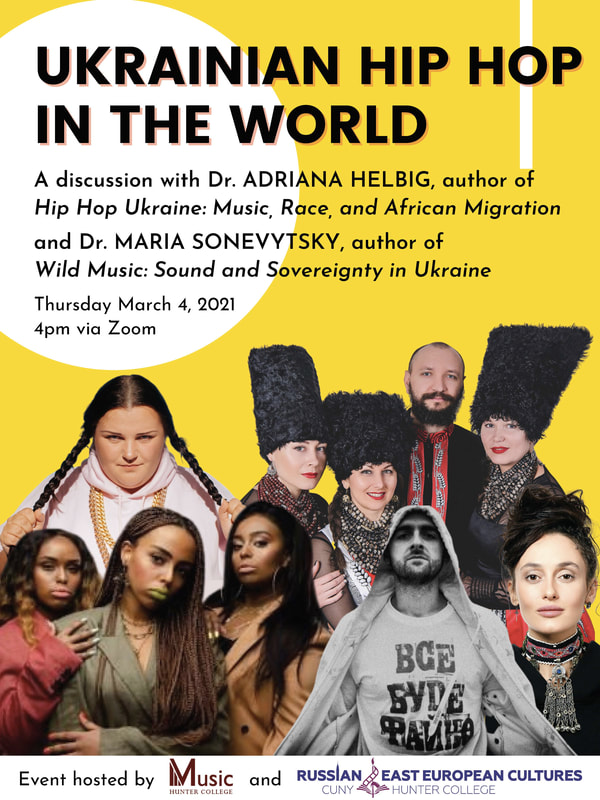 WATCH IT LIVE!
​Back to Top